skip to main | skip to sidebar

The textbook definition of "suckout"

God, that was sad.

The next hand was KK vs TT - TT hit a set and screwed me. Shortly after that, its AK vs AQ. AQ hit full house and screwed me out of the tournament. 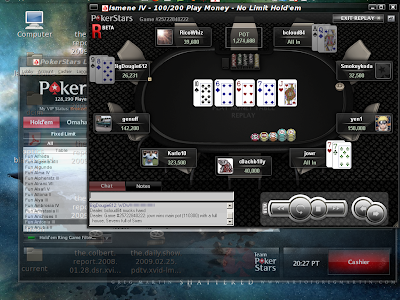 I have 6 outs to turn the hand from a two pair into a full boat, which gives me about a 25% chance of hitting. 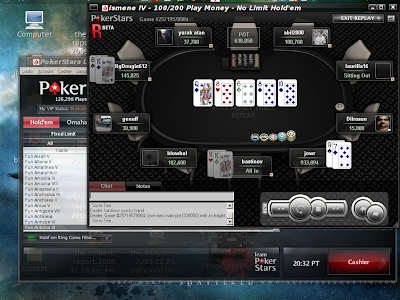 I happen to enjoy poker a great deal, particularally no limit Texas Hold'em. This is the PokerStars hand history for one (what I think is...) of the largest play money wins ever. If not ever, but most certaintly more than anyone on that table, myself included, has ever seen.

This is a 100/200 blind no ante play money Texas Hold'em table. What's especially fun is that I can sell these chips for roughly 10$ per million chips, so this was a 6 dollar win.

I do not know why I called this, 97 off-suite isn't that good. Off by one hole cards sometimes work though, and this is one of those times.

This is an open ended straight draw. How the fuck could I not make a bet here?

The turn was bad for me.

Mathematically, the odds of hitting an open ended straight after this is exactly 17.7%. However, my stack was rather large and by this point the pot was rather large - 500k is larger than I've ever seen. So I felt that was worth the shot - worst case is that I blow 70k on that, realize I'm drawing dead, and fold.

...I do sometimes bluff, and that bet was about 1/4 of the pot at that point. A decent sized bluff hand, just scaled to match my stack and the pot.

...bastinov had pocket kings. He stoped talking mad shit about me roughly 400k ago.

All the major work in general relativity stopped being done in the 60's and 70's, and that is only if you consider the singularity theorems and such by Hawking & Penrose to be part and parcel of the subject. Sure there have been refinements in the past 40 years and the occasional highly interesting bit of work [eg, Teutolsky's black hole bomb: [ hep-th/0404096 ] here and there, but I consider the subject roughly 'done'. That's why MTW - even though it was written near 40 years ago - is still the definitive book on the subject. Or why I

There have been the occasional branchings-out through things like Einstein-Cartan theory which have zero practical hope of experimental testing, and the pointless wandering of the thousand string theories, loop quantum gravity, etc. Nobody has accomplished fuck-all in all this time, even to the point of predicting simple Newtonian gravitation from the constructs.

In the past 40 years, folks have been trying Really Really Hard(tm) to break GR. My lifetime plus a few decades of lunar ranging has put some amazing constraints on alternative theories, and shown us exactly nothing that can't be taken care of by GR. More interesting and useful results like the handful of strong-field tests of GR via binary systems haven't put up anything special despite 30 years of trying [ astro-ph/0407149 ] in one particular example.

More recent fun stuff consists of dark matter, but it looks like GR can take care of that as well - protestations from the peanut gallery notwithstanding.

In fact, I don't see any serious challenge to GR existing right now. Cosmology is more of a challenge to particle physics than it is to GR. Dark matter has confused the bejezus out of the particle physics crowd, and there is that 100-or-so order of magnitude difference on the vacuum energy density [that GR correctly describes].

Sometimes I think gravitation just might not be quantizable and that's the correct way of looking at things. We'll see.
Posted by eric gisse at 2:26 PM No comments:

Every few weeks I go over to the research library and poke through the journals that interest me [PRL, APJ, etc] and see what folks are up to. Usually I just commit the interesting shit to the combined memory of my brain [bad] and notebook [much better], but I figure this is a more constructive use of my time!

At first blush, this seems pretty stupid - "What the fuck do gravitational waves and neutrinos have in common?" is a less-than-unreasonable thing to think. It turns out that pulses of both are produced at roughly [important!] the same time and in the same part of the star. If nothing else, the abstract taught me that neutrinos have a nonzero magnetic moment [~10^-11 the size of the Bohr Magneton] ...

The current paingiver in determining neutrino masses is that current Earthbound detection methods are only sensitive to the difference of squared masses [3 flavors, lots of combinations!] as opposed to the mass itself. So while the _differences_ are known to decent precision, the actual masses themselves are not. Which is a pain.

The basic idea borrows from that of the neutrino detection of SN1987a: neutrinos travel close to the speed of light, and everything inbetween is effectively transparent to them. The classic charactarization of attenuation for thse buggers is 50% capture through a light-year wide wall of lead.

The authors assume that both neutrinos and gravitational radiation are generated during the "neutronization phase" of a Type II supernova. That neutrinos are generated en-masse during such an event is obvious, that lots of gravitational radiation is produced is not. Let's assume it happens - we don't really know how asymmetric Type II's are anyway, so who the hell knows? It is specifically assumed that the gravitational wave [GW] signal is produced from the neutrino outflow itself, which I find fantastic as neutrinos do jack shit otherwise.

The process that makes all this go is rather complicated - reading the _entire_ paper is advised. Or make inferences based on my summary - whichever.

Step one is our old friend, the core collapse (Type II) supernova. Some poor star went through its' fuel cycle and mistakenly started producing Iron via fission. Unfortunately Iron is the inflection point which decides whether fusion or fission is the energetically favorable thing to do. Given that the star is propped up by the energy output in the core, turning off the power is the sure-fire way to really fuck up the local stellar neighborhood. The upper layers of the star now get to enjoy gravity's loving embrace, and go into free fall.

Assuming the quantum mechanics and general relativity are feeling generous, the access hatch to infinity stays closed and matter continues to function. The infalling core starts, among many messy things, pressing upon what is already there and eventually compresses the hell out of everything [so-called "neutronization phase] until only neutrons remain [neutron star]. Unfortunately for anything within a few light years that is vulnerable to neutrino capture, the p + e --> n process happens to spit out a boatload of neutrinos. The exact value of 'boatload' depends, but it should be kept in mind that neutrinos carry away a significant amount of the energy in a supernova and that a supernova outshines its' parent galaxy in the visible spectrum for many minutes. The number suggested in this paper is in the ballpark of 10^53 erg/sec.

[New word learned from this paper: deleptonization - I need to start playing scrabble]

Now, the authors assume that there is a chirality conversion process in which left-handed and right-handed neutrinos interact with the insanely magnetized [~10^13 gauss] plasma around the core, and convert to and fro. This conversion process is [presumably] asymmetric, from which the quadrupole moment and thus - eventually - the gravitational wave signal can be derived.

After referencing Beacom, J. F., et al. 2001, Phys. Rev. D, 60, 073011 in which the lag time between neutrino emission and gravitational wave emission is derived, it is explained that the lag time is directly proportional to the square of the neutrino mass.

Earlier it was shown that such events, as assumed, produce gravitational wave strain amplitudes that are well within reach of LIGO as it is now. Unfortunately, supernova events like this occur on the order of one per galaxy per century, and there are only a few galaxies within the volume observable by LIGO.

Merging neutrino and gravitational physics together like this is cool as hell.
Posted by eric gisse at 2:46 PM 1 comment: